On 24 February 2022 Russia invaded Ukraine. The invasion started with a coordinated missile attack on Ukraine's largest cities and quickly escalated to indiscriminate shelling of civilian infrastructure and other actions that are being investigated as war crimes.

Russian invasion caused Europe's largest refugee crisis since World War II, and most people in Europe strongly oppose it, expressing overwhelming support for Ukraine. However, some Russians living in Europe are happy with this violent military action against a sovereign nation and are comfortable expressing their support.

One of such people is Roman Rodyakin. When the invasion began, he was working as a Software Engineering Manager at Facebook (Meta) in London. He shared a strong message supporting the invasion and, after being confronted, doubled down on his position instead of showing even a little bit of empathy or compassion to thousands of people being impacted by Russian aggression.

Quite naturally some of Roman’s colleagues found this position unacceptable and became concerned that someone with such strong fringe views would not only be working alongside them, but would be in a position of leadership, being entrusted to make hiring and performance management decisions, inform product direction, mentor and coach other employees.

Roman Rodyakin has had a long career in tech, working for companies such as Amazon and Facebook. He might be a "successful manager", but we don’t think he can be a good leader. We are sharing these details here to make sure any future potential employers of Roman can be aware of his position and take his views into account while determining what responsibilities he can be trusted with.

Translation: Because my news feed is being filled with superficial copy-pasted comments like “war is bad”, while people who know the history of humanity and the advent of globalism quietly rejoice and congratulate each other, I will directly and publicly say: I fully support the decision of Russian elites to begin the operation, I admire the implementation of political and information support, I am impressed by the choice of military strategy, I consider both speeches of Russian President to be historic, and I wish a fast and painful resolution of the situation. Russia does not begin wars – but ends them. 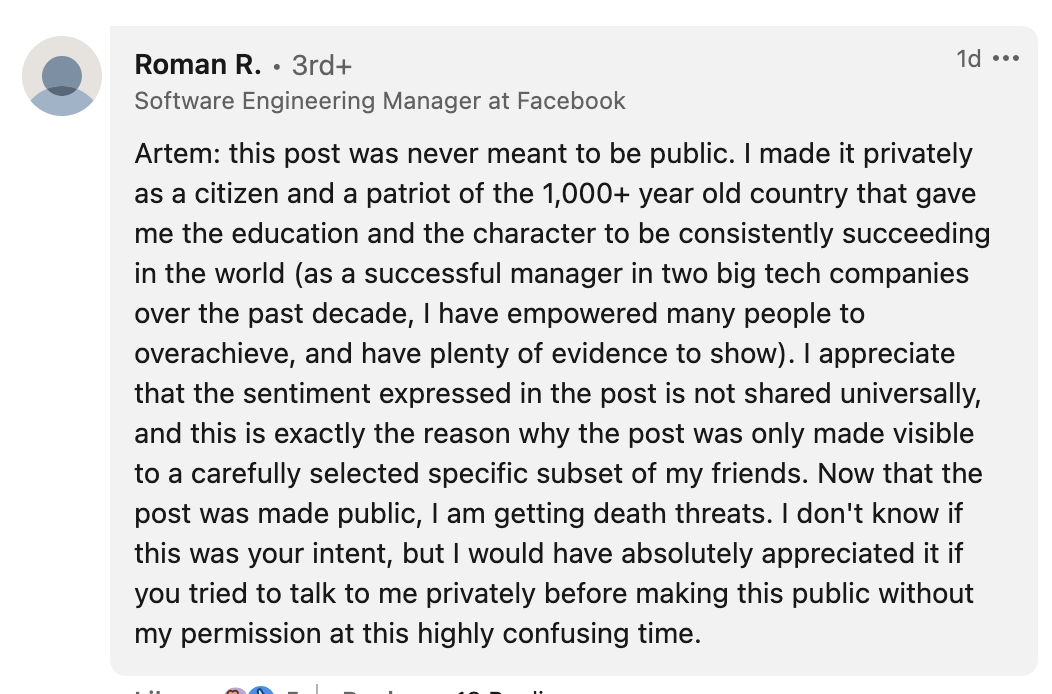